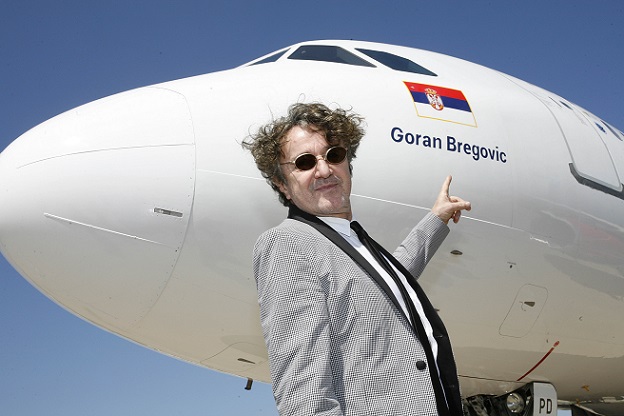 Air Serbia, the national airline of the Republic of Serbia, has named one of its aircraft after Goran Bregović, the internationally-renowned musician and composer.

Mr Bregović is the fifth Serbian citizen to be honoured as part of Air Serbia’s “Living Legends” initiative, for his immeasurable contribution to Serbian and world music.

The Airbus A319, with “Goran Bregović” proudly emblazoned on the fuselage, was unveiled today during a special ceremony in an aircraft hangar at Nikola Tesla Airport.‎

Dane Kondić, Chief Executive Officer of Air Serbia, said: “Goran Bregović has composed some of the biggest songs of the past few decades, not only in Serbia, but in the region and all over the world, and we are delighted to name an aircraft in his honour.

“Known for combining seemingly irreconcilable music genres and styles, Goran writes music that has lasting power. With his innovative approach and commitment, he broke through regional boundaries to emerge as a global brand.

“In many ways, his success is comparable to that of Air Serbia, which will this evening receive the 2017 Airline Market Leader award from Air Transport World at an awards ceremony in New York.

“So far we have named three aircraft after famous sportsmen and one after our popular actor, and it was the right time for an aircraft to be named after a renowned musician.”

Goran Bregović said: “When I was a small kid, I often dreamt about flying, like most children do. Now, when I’m asleep, my dreams are still always about flying. My job means that I have to take off and land at least 200 times per year. And once you’ve experienced the wonder of air travel, you’re always looking at the sky, even when you’re walking. I believe that is why I love everything related to aviation.”

Bregović started his career in 1974, forming the ‘Bijelo dugme’ rock band, which was, for more than two decades, one of the most popular bands in the former Yugoslavia. By merging rock and ethno motives, which was not usual at the time, he made a considerable impact on the music scene and developed a style that became his trademark.

Bregović achieved great success and gained worldwide fame for his work on soundtracks for numerous domestic and foreign films that won awards at international film festivals, such as the “Time of the Gypsies” from 1989 and “Queen Margot“, which received two awards at the 1994 Cannes Festival. He was also the composer for “Underground”, which won a Palm d’Or at the 1995 Cannes Festival, and wrote music for numerous famous singers, including Cesária Évora.